Ah the holidays. A time where you get to spend more time as a family, a time when routines get messed with, and a time where at least someone in the house gets sick.  This year, it was me first and my wife second.  The kids?  They managed to stay remarkably healthy.  That's right, the walking cesspools of germs that they are skate away from the holiday season unscathed while I spend three days of the week leading up to Christmas alternating between chills and sweats and my wife, bless her, spends all of Christmas Day barfing every hour, on the hour, beginning at midnight.

Other than that though, Christmas was awesome.

Remember the old stories of your dad staying up all night Christmas Eve putting together some toy of yours that had 1000 some-odd pieces? Well I have my wife to thank for saving me from this fate.  Thing 2's four foot tall doll house took a full three hours to put together. Luckily, she pressured me to do that a couple days before the big day.  I almost wanted to wait just so I could have such a story to pass on, like some fatherly rite of passage.   I have dumb ideas sometimes.  I probably could have put the damn thing together faster had a had a proper screwdriver. The good one was in a drawer no less than 5 feet from the spot I was labouring on with one of those useless quick-change screwdrivers with all the stupid bits inside.  I found the proper screwdriver days later as we were de-Christmasing the house.

Ever notice that I make up a word in pretty much every one of these posts?

So every year I seem to have a moment where I become a classic Christmas movie dad. There was the time I fell off the roof messing with the Christmas lights à la Clark Griswold.  This year it was George Bailey. 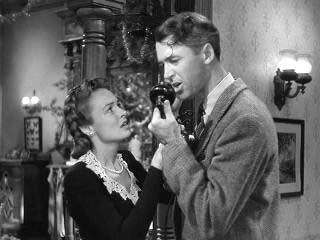 If you've seen It's A Wonderful Life, (which if you haven't, what the hell is wrong with you?), you'll know the scene where George calls the teacher and gives her shit after Zuzu gets sick when she walks home without her coat done up.  Well I kind of pulled a similar overreaction when I gave the caregivers crap when I picked up Thing 2 from preschool and found her playing outside without a toque on when it was -10 Celsius.  Turned out that was the night I got sick.  Coincidence?

And a final thought: At what point did a Christmas pageant become a winter concert?  When I was in kindergarten in public school circa 1988, we did the full nativity scene (a shepherd à la Linus).  Fast forward to Thing 1's kindergarten winter concert  in 2016 and the word Christmas can't even be uttered.  Instead they performed the Olaf song from Frozen with altered lyrics.  Still cute as hell mind you.  Especially cute since Thing 1 is at least 4 inches shorter than each of the other 63 kindergarten kids and they stuck him dead centre in the front row.  Priceless.
Posted by Daddy@ Home at 07:58 No comments: