The Threshold of Hell (or, Flying with Kids)

Our kids are generally pretty good.  They can eat at restaurants without making a scene or forcing us to bust out tablets.  They can ride in cars without much complaining or frequent needing  pit stops.

In light of this, we decided plane travel would be fun.  If you've never had the pleasure or flying with kids, I urge you to keep it that way.  It's not, and never will be, a good idea.

They really should just ban kids under 10 from non-emergency plane travel altogether.  Nobody wants to be around your kids on a plane.  They fidget.  They whine and cry. They require frequent trips to that tiny, disgusting airplane bathroom.  If you've never had to help a kid with their pants or wipe their ass in a vertical coffin before, trust me, you aren't missing a thing.  Travelling with two kids?  Double the fun.

Think flying in the middle of the night makes sense because they'll just sleep the whole time?  Dead f-ing wrong.  In fact it's about a million times worse because they're overtired and you're tired and no one gets any rest of sleep.  New colouring books last about 3 minutes on a five hour flight.  The in-flight movie is almost never worthy of a 5 year old's attention.  Especially if you're on a crappy Sunwing flight where the tiny screen flops down every 3 rows and the one in front of your seats is out of order.

In summary, the flight makes you need the impending vacation more than anything else in the world.

Oh, and if you kids happen to have a dairy allergy, bring enough snacks for a three week trek through the jungle.  Everything on a plane but the saltine crackers has bloody cheese in it.

For our trip, we landed at about 8pm in Punta Cana.  It was raining.  It was another hour to the resort via shuttle.  The kids thought it was a riot to fly down the highway in only big person seatbelts.  It scared the living shit out of me.

Fun fact: When you get to a resort after 9pm, there's no welcome cocktail.

God I needed that cocktail.

They somehow lost a wheel  on our stroller while in transit.  If you have never tried pushing a 30 pound kid in a stroller with a missing wheel,  I don't recommend adding it to you bucket list.

We thought we booked a 5 star hotel.  This hotel was actually a 4 on the sign.  I wouldn't have given it a 3.  Our room smelled like pee pee.  The beds were at least as old as me and had definite bows to them.  The room faced the bar area where the party was happening.  We were all miserable.  And starving.

Food options at a shitty resort at 10pm?  Cold french fries and cheese pizza.  Fries it was.

After a fitful night of "sleep" in our oh-so-comfy beds and soothing bass-thump, I headed down to the front desk  the next morning and moved us the hell out of there and to the five-star next door.  Adios amigos.

After that the trip was pretty great.

By the way, if you do ever happen to want to take a voyage into hell's half acre with your kids, use the covered airport parking lot.  Best $200 bucks we ever spent.  When you get back into Toronto in the middle of January at 2am, you want that minivan of awesomeness close by and not buried in snow in some park 'n' fly lot you have to take a shuttle to.  Trust me on that one.

Here's the tale of our family's fabled rafting trip down the Grand River.

One day this summer, we decided to purchase an inflatable raft from Canadian Tire.  It was on sale and looked like it would make for at least one fun family afternoon.

We were wrong.  Well, not entirely.  It did end up being pretty funny, just not for the reason we thought.

It was a very hot and humid summer here in Southern Ontario, and nothing beats the summer heat like being around the water. We picked a particularly clear and hot Saturday to try out the new raft.  We parked the Van of Awesomeness (for details on said van, see:  http://mysahdexistence.blogspot.com/2016/08/the-minivan-of-awesomeness.html ) about 9 km down the river, and drove the car back to town. A lofty goal indeed, but it's a pretty free-flowing stretch of water, so I thought it was doable. A two hour trip or so. That was Mistake #1.

We parked the car near a canoe put-in and unboxed the raft.  That's right, we never checked to see if we'd actually all fit in this thing. That was Mistake #2. We blew it up and discovered that, despite having a weight limit of like 450 lbs., this thing could barely fit me, let alone my wife and the two kids as well. Crap.

Speaking of crap.  I have inadvertently taught my six year old the word crap.  I must have described dollar store Lego as crap one time, because now every time he sees building blocks in stores without the Lego logo on it, he loudly and proudly proclaims to his sister that it's Crap Lego.  Oops.  At least he has the right context.

Despite the size of the wee raft, we decided that since we were there, we all just go out on the water for a few minutes, just to say we did, then head back to shore and drive back to get the Van.  We squeezed in, me at the stern with Thing 1 sitting on my legs, facing Thing 2 with mommy sitting not at the bow, but on the inflated bow.  Man, I wish we had a camera on us that day.
With much effort, we pushed out, my ass dragging along the rocky shore until we got to deeper water.  Deeper as in about a foot and a half deep.  Being the hot summer that it was, we failed to realize that the water level would be extremely low.  Mistake #3.  The current was moving despite the shallow water and we started drifting, rather slowly, downstream.  So we went with it.  Mistake #4.

Maybe a kilometer or so down the river, it happened.  My ass dragged across a jagged rock and pop! went the middle of the three air chambers. The raft could no longer handle the weight of us all and we started taking in water, much to Thing 1's absolute horror. My wife hopped off the front  into the calf deep water and he started freaking out, yelling something that sounded remarkably like, "SHIT, SHIT, SHIT, SHIT".  I'll blame my wife for that word.

It was then my turn to get out, having to throw one leg over top of the panicking child and more or less roll into the water.  Another missed photo opportunity I'm sure.  Between my gracefulness and his sheer terror, my wife is now laughing so hard she has tears rolling down her cheeks.
Luckily, the raft has a tow rope on the front and enough air left in it for the kids to stay in and not have to walk all the way back to the car.

They got ice cream on the way home for that one.

Back to school..and blogging

So, it's been a while.  I can give you any numbers of excuses as to why I haven't been blogging, but they'd all be pretty lame.  Truth is, life just got in the way.  But anyway, I'm back to entertain you for five minutes each week or so.  How lucky you are!

I've actually had a number of people come up to me in the past year or so asking why I don't post anymore.

So here goes  my attempt to reclaim my former blogger glory. And by glory, I mean the 60 to 80 blog views I used to get.

The reason I have all this free time to write again is because Thing 2 has started junior kindergarten!  As I stood there this morning watching her walk in the front door with the rest of the JK's, I of course uttered the words "FREEDOM!".  When I looked around though, I seemed to be the only one not bawling my eyes out.  What kind of father am I?  Not even a little sad to see his youngest leave him for good.  I'll tell you what kind of father I am: A proud one.  She walked through those gates like she owned the place.  Not even a moment's hesitation or mournful look back to me.  She was ready.  Truth is, she's been ready for at least two years.

Do you want to know what I hate about back to school though?  Not the endless facebook posts from all my friends of their kids back to school photos, because they're all so damn cute. It's those stupid signs each kid is holding.  Not only that, but the fact that I have to do it too.  Last year I wrote it on white paper with black marker. Simple and to the point.  But oh the shitstorm I took for that.  You got Pinterest giving all these parents stupid ideas with elaborate signs all decked out with f-ing tassles and glitter.  Hell, even the craft store Michael's had a sign making workshop that I didn't sign up for.  I got hell from my wife too for that.

So a mom friend of mine graciously gave my some extra premade signs that they were giving out at the grocery store.  The problem?  They're printed over a forest green background to make it look like an old chalkboard.  Forest f-ing green.   Do you know what you can use to write on shiny forest green paper?  Sweet nothing.  I tried white crayons, killed two gel pens and even tried chalk.  Nothing worked well.  By the second kid's sign, I was literally scratching through the green to get to the write underneath. 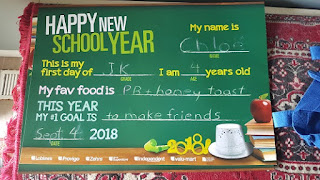 Didn't think that through too much, did you Loblaws?

Until next time, folks!  Now, I just have to remember how to publish the blog...